The Book of Beginning Circle Games

By Feierabend, John
Item No. 804146
UPC Code 9781579992668
0 reviews Write a review
Written by one of the foremost leaders in early childhood music education, John Feierabend, The Book of Beginning Circle Games is a collection of traditional games to play in circles. Some of the games are stationary games in which one child chases after another while the rest of the group does not
Read full description Print preview

This item has international shipping restrictions. Would you like to continue adding this item to your basket?
Description
Written by one of the foremost leaders in early childhood music education, John Feierabend, The Book of Beginning Circle Games is a collection of traditional games to play in circles. Some of the games are stationary games in which one child chases after another while the rest of the group does not move. Some games begin with stationary circles, but end with traveling circles as, one by one, children join a group moving around the circle. And some circle games travel around and around, often ending with a surprise twist. All the games encourage a variety of developmentally appropriate behaviors - social skills, cognitive development, creativity, language development, motor skills and musical skills. The musical elements of melody, beat, structure and expressiveness are also central to circle game songs. A sense of community is also developed in playing these games. Each song shows the melody line and at least one verse of lyrics, as well as game directions. Songs in foreign languages do not have a pronunciation guide, but a general translation is given.
For ages 3 - 7.
Contents:
Stationary Circles: Bow Wow Wow; Hickety Pickety; I Have a Tree; In and Out the Window; Little Sally Walker; Muffin Man; 'Round & 'Round the Village; Shooliloo
Hidden Objects (stationary circle): Black Snake; Biddy, Biddy; Button You Must Wander; Bob-a-Needle; El Floron (Spanish)
Chase Games in a Circle: A Tisket a Tasket; Charlie Over the Ocean; Chase the Squirrel; Cut the Cake; Grizzly Bear; Le Furet (French); Little Swallow
Stationary Becomes Traveling: All Around the Buttercup; Boom Makaleli; Brown Bread and Butter; The Farmer in the Dell; Go In and Out the Window; Here Comes a Bluebird; Little Bird; My Little Boat; Old Bald Eagle; Old King Glory; One Elephant; Uno Elefante (Spanish); Needle and Thread
Traveling Circles: Al Corro de la Patata (Spanish); Allee Galloo; Built My Lady; Down in the Valley; Francisco; Our Gallant Ship; Gira Gira Tondo (Italian); Ickle Ockle; Jump Jim Along; La Rueda de San Miguel (Spanish); Little Red Caboose; Looby Loo; Here We Go 'Round the Mulberry Bush; No Bears Out Tonight; Oats, Peas, Beans, and Barley; Our Boots; Paw-Paw Patch; Savez-vous Planter des Choux (French Canadian); Peep Squirrel; Ring a Ring a Roundo; Ring Around the Rosie; Ringo Ringo Rango; Rosie Darling Rosie; Sally Go 'Round the Sun; Santa Maloney; Shoo Turkey; Snail Snail; Take Your Feet out the Sand; The Leaves Are Green; This Lady She Wears; Walk Along John; Walk Daniel; Wind the Bobbin
Pass Under the Arch: Que Pase el Rey (Spanish); La Fuente (Spanish); Como la Vibora (Spanish); London Bridge; The Needle's Eye (2 versions are given); Oranges and Lemons
Chase Games Not in a Circle: Blackhorn; Chickama Chickama; How Many Miles to London Town; Old Raggy
Reviews (0)
There are no reviews yet.
Write a review 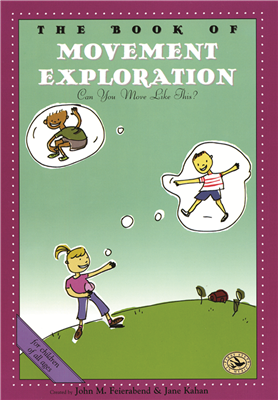 The Book of Movement Exploration

The Book of Children's Song Tales

The Book of Fingerplays & Action Songs

The Book of Songs and Rhymes with Beat Motions