By Rodgers, Richard Hammerstein II, Oscar
Item No. 860646
0 reviews Write a review
Getting to Know...Oklahoma! By Richard Rodgers and Oscar HammersteiniTheatrics Production PackRuntime 50-70 minutesFor grades up thru grade 9 Rodgers & Hammerstein's first collaboration remains, in many ways, their most innovative, having set the standards and established the rules of musical
Read full description Print preview

This item has international shipping restrictions. Would you like to continue adding this item to your basket?
Description
Getting to Know...Oklahoma! By Richard Rodgers and Oscar HammersteiniTheatrics Production PackRuntime 50-70 minutesFor grades up thru grade 9
Rodgers & Hammerstein's first collaboration remains, in many ways, their most innovative, having set the standards and established the rules of musical theatre still being followed today.
Who is eligible to purchase this showkit?

All other organizations must order directly from Rodgers & Hammerstein.
Synopsis:Set in a Western Indian territory just after the turn of the century, the high-spirited rivalry between the local farmers and cowboys provides the colorful background against which Curly, a handsome cowboy, and Laurey, a winsome farm girl, play out their love story. Although the road to true love never runs smooth, with these two headstrong romantics holding the reins, love's journey is as bumpy as a surrey ride down a country road. That they will succeed in making a new life together we have no doubt, and that this new life will begin in a brand-new state provides the ultimate climax to the triumphant OKLAHOMA!
In this adaptation for pre-high school students, the content has been edited to better suit younger attention spans, but all the elements that make this show a classic are still in place. You and your students will be enchanted by the timeless story and the dazzling score, while at the same time learning about theater and its production.
A Note from iTheatrics about this new adaptation:
In each of our iTheatrics' adaptations, we are careful to remain true to the storytelling of the original show. Our goal is for our adaptations to be as seamless as possible, allowing us to tell the story, but in a way that is appropriate for the age group. Our new adaptation of Oklahoma! eliminates the song "Poor Jud is Dead," as we found this song's subject matter challenging for the age group. In addition, we added back "Many a New Day" and "All er Nuthin" to ensure more stage time for female performers. The response from teachers who attended our workshop productions, or who have piloted the show in their schools, has been incredibly positive.
Cast of Characters:
Aunt Eller is a sturdy farm woman who has managed to make a life on the frontier for herself and her niece, Laurey. She knows the value of cooperation and plays the role of peacemaker between the conflicting farmers and cowboys. She’s a big-hearted woman who can easily empathize with others but who can also be tough when she has to be.
Curly is a confident cowboy with the kind of affable personality that people are drawn to. His strong ego sometimes causes him to be too sure of himself. He has a stubborn streak that keeps him from letting Laurey know how much he cares for her. However, when he sees Laurey in distress, he is able to drop his defenses and open up to her emotionally.
Laurey is a strong, spunky farm girl. She has been raised by her Aunt Eller and has learned to be self-sufficient. Unlike some of her girl friends, she doesn’t feel the need for a man to take care of her. Like Curly, she is too stubborn to let him know how she really feels about him. But when she is threatened by Jud, it’s Curly she turns to for comfort.
Jud Fry is Laurey and Aunt Eller's surly hired hand and he has his eye on Laurey. He has a dark, possibly criminal past and his sullen, volatile nature frightens Laurey. He leads a solitary life of emotional isolation and, not being used to interacting with people, his social skills are limited. He feels a need to change his life but is uncertain of how to go about it. Although Jud is the putative villain of the story, there is an underlying emotional complexity that makes him, ultimately, sympathetic. Jud is a non-singing role.
Ado Annie is a boy-crazy farm girl. She's too naïve to know how to handle herself around men, which gets her into trouble. She tends to favor whichever boy she’s with and although she has strong feelings for Will, her head is easily turned by any man who pays attention to her.
Will Parker is a good-natured cowboy and champion steer roper. He's in love with Ado Annie and not afraid to express his feelings. He may not be the brightest guy around but his high-spirited energy and affectionate personality make him a good friend to everyone. There’s no doubt that he'll be a good husband to Ado Annie.
The Peddler is a traveling salesman who's a bit of a shyster, his merchandise often being bogus. He fancies himself a ladies' man and when he gets too entangled with a girl, he simply moves on to the next town. So when he makes a pass at Ado Annie and her father takes it as a proposal of marriage, it looks like his days as a roving Casanova are over, much to his dismay.
Andrew Carnes is Ado Annie's protective father and he is determined that no man will take advantage of her innocent nature. He has never taken the dopey Will Parker seriously as a prospective son-in-law. When the Peddler tells Ado Annie that he wants to ride with her "to the end of the world," Carnes takes that as a proposal of marriage. He's also a good friend to Aunt Eller and if she ever needed help with anything, he'd be there in a shot.
Gertle Cummings is a silly flirt from a nearby town with the most annoying laugh in the Territory. She's too full of herself to realize that that most people would rather not be in her company.
Chorus includes farmers, ranchers, cowboys and townspeople.
Songs Include:

Special Feature: Instant Digital Downloads!
Once you have been approved for a license, you will receive an email from the Rodgers & Hammerstein organization welcoming you to the Getting To Know family. This email will include a download link for the following digital resources:
Audition-ready materials, including ready-to-print, show-specific audition music, scenes, and even specially created audition accompaniment tracks (Audition accompanist optional!Show specific information, including a music cue sheet, props list, scene-by-scene set breakdown, a list of costumes by character, and official show artworkA digital copy of the Production Guide, which you can use on your tablets and mobile devicesA complete set of Vocal Tracks for the show - start your rehearsals now!
By accessing these digital resources, you can begin the process of planning your show, and even hold auditions, prior to receiving your printed Production Pack. No more waiting for your show materials to arrive!
Specifications
Reviews (0)
There are no reviews yet.
Write a review 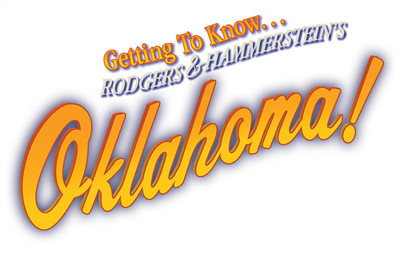 Getting to Know...Oklahoma! Perusal Pack