Getting to Know...Once Upon a Mattress Production Pack

This item has international shipping restrictions. Would you like to continue adding this item to your basket?
Description
Getting to Know...Once Upon a Mattress Production Pack  By Rodgers and Hammerstein iTheatrics Production Pack Each showkit contains:30 Libretto/Vocal Books1 Piano/Vocal Score1 Production Guide(Includes: Performance/Accompaniment CD Choreography DVD Media Resources Disc)
Special Feature: Instant Digital Downloads!
Once you have been approved for a license, you will receive an email from the Rodgers & Hammerstein organization welcoming you to the Getting To Know family. This email will include a download link for the following digital resources:

Audition-ready materials, including ready-to-print, show-specific audition music, scenes, and even specially created audition accompaniment tracks (Audition accompanist optional!)
Show specific information, including a music cue sheet, props list, scene-by-scene set breakdown, a list of costumes by character, and official show artwork
A digital copy of the Production Guide, which you can use on your tablets and mobile devices
A complete set of Vocal Tracks for the show - start your rehearsals now!

By accessing these digital resources, you can begin the process of planning your show, and even hold auditions, prior to receiving your printed Production Pack. No more waiting for your show materials to arrive!
Who is eligible to purchase this showkit?Accredited schools using actors in Grades K-9, including American schools with an APO addressHomeschool organizationsAll other organizations must order directly from Rodgers & Hammerstein.
Overview/Synopsis:If you thought you knew the story of "The Princess and The Pea," you may be in for a walloping surprise! Did you know, for instance, that Princess Winnifred actually swam the moat to reach Prince Dauntless the Drab? Or that it may not have been the pea at all that caused the princess a sleepless night? Carried on a wave of beguiling songs, by turns hilarious and raucous, romantic and melodic, this rollicking spin on the familiar classic of royal courtship and comeuppance provides for some side-splitting shenanigans. Chances are, you'll never look at fairy tales quite the same way again.
A Note from iTheatrics about this new adaptation:In each iTheatrics adaptation, we pay special attention to making the material achievable for elementary and middle school students. We modify the music to fit young voices, shorten the running time of the show to make it less daunting for busy educators, and adapt the script to ensure that it's appropriate for the age group (while staying as true as possible to the original story). iTheatrics' adaptations include key points for directors and educators, advice on how to stage tricky sequences, and a number of suggestions and tips from our experience in the field.
Every iTheatrics adaptation is workshopped with age-appropriate performers so that we can accurately advise teachers on the challenges they may face during their productions. Every adaptation is vetted both by the iTheatrics team and real, in-the-field teachers and students - and if they can do it, so can you!
Cast of Characters:
Princess Winnifred the Woebegone is down-to-earth and without pretensions. Unlike what you might expect from of a princess, Winnifred is just an ordinary, high spirited girl. Having grown up in the swamps, she doesn't conduct herself in the formal way the others in the castle do. It is her natural, ingenuous quality that sets her apart from the other Ladies of the kingdom and makes Dauntless fall in love with her.
Prince Dauntless the Drab, as him name implies, is kind of a sad-sack and somewhat listless. Although his overbearing mother controls his life and he is an obedient son, he still has hopes of someday finding a girl to marry of whom his mother will approve. Like Winnifred, he is honest and sincere. She gives him confidence in himself and within the course of the musical, we see him grow in self-assurance until he is finally able to confront his mother.
Queen Aggravain, as her name suggests, is extremely vain, believing that her way of doing things is the only way. She is devoted to her son, Dauntless, and has no intention of ever allowing him to leave her or to have another woman in his life. She selfishly dominates everything that happens in the castle, never considering the feelings of others.
The Silent King has been brow-beaten by the Queen and is very passive. He has learned that it is easier just to let the Queen have her own way than to fight her. Because he has not been able to speak for so long, he has learned to communicate through pantomime, or gestures. He loves his son and sympathizes with him but realizes he can do little to help him. Despite his frustrations, he is extremely good natured.
Lady Larken is a sweet girl but, perhaps because she is in love but unable to marry, she tends to be oversensitive. She is extremely frustrated that she can't marry Harry, but also extremely excited at the opportunity to be Lady-in-Waiting to Princess Winnifred. Of all the Ladies, it is Larken who most hopes that Winnifred will pass the test.
Sir Harry is a regular guy and, like Larken, is eager for Dauntless to find a bride so that he and Larken can marry. He is brave and dedicated enough to venture on a "perilous journey" in hopes of finding a genuine princess whom the Queen will find suitable as a bride for Dauntless.
The Minstrel and Jester are court entertainers and they have a great sense of joy in what they do. They sometimes serve as narrators and are assured in their ability to tell the story with authority. There is also something playful and mischievous about them. Either role may be played by a boy or girl.
The Wizard is the Queen's confidant, her only friend and therefore the only person she can really talk to. However, he, like everyone else in the kingdom, is apprehensive of the Queen and would never have to courage to contradict her.
Songs Include:
Many Moons AgoOpening for a PrincessShySensitivityThe Swamps of HomeThe Minstrel, the Jester and IHappily Ever AfterYesterday I Loved YouSpanish PanicSong of LoveThree O'clock in the Morning/Quiet!
Specifications
Reviews (0)
There are no reviews yet.
Write a review 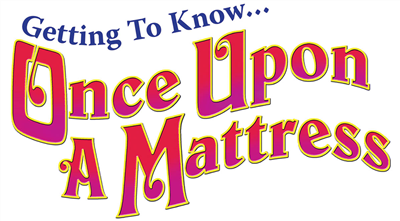 Getting to Know...Once Upon a Mattress Perusal Pack