Into the Woods Jr ShowKit

By Sondheim, Stephen
Item No. 821282
0 reviews Write a review
Bring the magic of Broadway to your classroom and school theater with these student adaptations of classic Broadway musicals. Each of these treasured tales is teacher-tested, kid-friendly, and custom tailored for success.    The ShowKit includes all the resources you need for a successful production
Read full description Print preview

Overview/Synopsis:
Into the Woods Junior is an engaging and funny musical comedy that twists familiar fairy tales into a brand new story. When a Baker and his Wife learn they've been cursed with childlessness by the Witch next door, they embark on a quest for the special objects required to break the spell; swindling, deceiving and stealing from Cinderella, Little Red Riding Hood, Rapunzel and Jack (the one who climbed the beanstalk)!
Equally at home in large or intimate spaces, Into the Woods Junior is a funny and engaging way to get young people to think about the stories with which they've grown up, and the ethical issues raised therein.

Cast of Characters:
THE BAKER is an innocent but stubborn husband. This is a large role that has some challenging singing. The audience should never doubt he is a good-hearted person, trying to do what is right.
THE BAKER'S WIFE is strong, determined and patient. The role requires excellent singing AND acting, plus a good sense of comic timing.
CINDERELLA is at once beautiful and surprisingly clumsy and awkward. Cinderella has very little dialogue.
CINDERELLA'S FAMILY – Cinderella’s Stepmother, her stepsisters Florinda and Lucinda, and her Father are great comedic roles. Cinderella’s Mother is a one-scene wonder. The voice should be strong and pleasant. A collection of remembered mannerisms and sayings.
JACK has a lot of dialogue, and is responsible for singing two of the best-loved songs: "I Guess This Is Goodbye" and "Giants in the Sky." This is a role that could conceivably be played by a young woman, however, you will want to make sure she plays it as a boy and doesn’t change the gender of the character.
JACK'S MOTHER is described physically as "not quite pretty." She should be comfortable playing frazzled and frumpy. This is mainly an acting role and therefore requires an actress with an easily projected, authoritative speaking voice.
LITTLE RED RIDINGHOOD is pushy, bratty, over-fed and spoiled. Her journey teaches her some very important lessons. A wonderfully fun role for the right girl.
THE NARRATOR/MYSTERIOUS MAN tells the story to the audience. While he doesn’t sing much, he does have the most lines to memorize, being the largest role in the show. The Narrator is frequently cast as the Mysterious Man as well.
RAPUNZEL must stand up to her mother and eventually leave her for the world. This role requires an excellent soprano voice.
RAPUNZEL'S PRINCE and CINDERELLA'S PRINCE are pompous, conceited and self-absorbed brothers. They should be able to carry themselves with confidence. Both should be good singers.
THE WITCH is the ultimate character role. Originally played by Bernadette Peters on Broadway, it requires a good singer/actor who can deliver the drama of the script. Mysterious and mischievous.
THE WOLF should be properly slimy and a bit creepy.
THE STEWARD is a great role to gain experience.
GRANNY may be doubled by Cinderella's mother.

Songs Include:
Cinderella at the Grave
Hello, Little Girl
I Guess This is Goodbye/Maybe They're Magic
Rapunzel
I Know Things Now
A Very Nice Prince
Giants in the Sky
Agony
It Takes Two
Stay With Me
On the Steps of the Palace 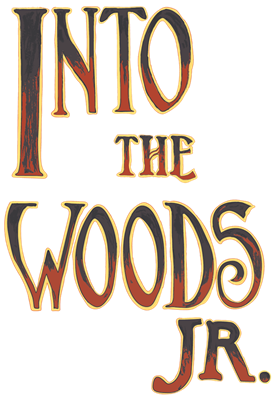 Into the Woods Jr Audio Sampler