By Williams, Paul
Item No. 849563
0 reviews Write a review
Bring the magic of Broadway to your classroom and school theater with these student adaptations of classic Broadway musicals. Each of these treasured tales is teacher-tested, kid-friendly, and custom tailored for success.    The ShowKit includes all the resources you need for a successful production
Read full description Print preview

Based on the hit 1976 film starring a preteen Scott Baio and Jodi Foster, and featuring a catchy, swinging score by the composer of The Muppet Movie, Bugsy Malone JR. is good, clean, comedic Fun!
Two gangs, comprised completely of children, square off in a 1920s rivalry of Capone-ian standards. Dandy Dan's gang has gotten the upper hand since obtaining the "splurge" gun (a weapon that shoots whipped cream). Now Fat Sam and his bumbling buffoons are in real trouble! Bugsy Malone, a one-time boxer, is thrust not-so-willingly into the gangster limelight, when he becomes the last chance Fat Sam's gang has of surviving. All Bugsy really wants to do is spend time with his new love Blousey, but that just isn't in the cards for our hero.
Bugsy Malone JR. includes a chorus, which may be expanded by adding as many members to Dandy Dan's and Fat Sam's gangs as your stage can accommodate. The Grand Slam Girls can also be expanded to incorporate more singing and dancing girls.

Cast of Characters:
Bugsy Malone
Bugsy Malone is the hero of the story. Cast a handsome young man who can sing and act. This role is equal parts Jimmy Stewart, James Bond and Gene Kelly. Bugsy alternates as the narrator and the star of the show. A young performer comfortable in front of an audience, who radiates a sense of charm and sincerity as well as a street-wise sensibility, will take your show a long way towards success.

Blousey Brown
Blousey Brown is at first a typical young, wide-eyed, would-be star, just off the bus from a small town. However, we find out that Blousey is a force to be reckoned with and is certainly nobody's fool. This is a large role that requires good singing and acting, but the key to casting Blousey is finding a young actor who is at home with comedy. A young Carol Burnett type is recommended.

Tallulah
Tallulah is the classic gangster's moll. Cast a young woman who is self-confident and can deliver the role with deadpan sincerity and droll appeal. Tallulah is a Mae West type with a talent for performing. She needs to be a strong singer for her self-titled number.

Fizzy
Fizzy is an employee of Fat Sam's at the Grand Slam, whose duties mostly involve cleaning up the place. To cast Fizzy, find an actor who can really delivery the song "Tomorrow." It is a difficult song that requires emotional singing and a significant range. Hopefully, you'll find a singer who can delivery Fizzy's sad-eyed hopes and dreams as he sweeps up.

Fat Sam Stacetto
Fat Sam Stacetto is the baddest of the bad guys, whose biggest rival is Dandy Dan. Fat Sam should be an adept physical comedian with a commanding stage presence. He sings, so make sure you've got an actor who can carry a tune, but moreover, finding an experienced actor with good projection and diction skills is important. Fat Sam carries much of the dialogue of the show. Note that Fat Sam does not need to be fat. You can dress him in a fat suit or cast a realty small kid with a booming voice for comedic effect.

Dandy Dan
Dandy Dan is the unflappably stylish, debonair, underworld businessman who outwits Fat Sam every step of the way. Your Dan should be comfortable singing his song, "That's Why They Call Him Dandy." Find an actor with just the right sense of style and grace.

Lena Marelli
Lena Marelli is the star of the "Lena Marelli Show!," and she lets everyone know it. Cast a young performer who can TAKE OVER THE STAGE with a strong singing voice. An affected character voice is practically a requirement to delivery this role. Lena is not very bright, but she is very loud. Think Lina Lamont from Singin' in the Rain.

Fat Sam's Gang
Fat Sam's Gang includes Roxy Robinson, Angelo, Snake Eyes, Ritzy, Shake Down Louis and Sam's right hand man, Knuckles. You may add as many ensemble members to the gangs as your stage can accommodate. These fellows are bumbling, funny, non-threatening hoodlums. They should be able to sing with gusto (if not in tune) and be willing to work on the rigors of physical comedy. Many productions have successfully cast girls in these roles.

Dandy Dan's Gang
Dandy Dan's Gang members are really bad guys. Also known as The Hoods, they sing a little, but they splurge a lot! Cast suave-looking types who can pull off slicked-back hair and double-breasted suits. Many productions have successfully cast girls in these roles. The Hoods include Bronx Charlie, Shoulders, Benny Lee, Yonkers, Laughing Boy and Doodle.

Tallulah's Girls
The Tallulah's Girls perform at the speakeasy, and they include Tillie, Loretta, Dotty and Bangles. These girls should be very at home singing and dancing and should work well as ensemble singers. They are basically Tallulah's gang! Bangles has the most dialogue of these girls, so you might want to put your best actor in that role.

Oscar De Velt
Oscar De Velt is the stage equivalent of Cecil B. DeMille. A strong, confident actor will fit the bill here.

Marbini the Magician
Marbini the Magician and The Ventriloquist are two wonderfully funny smaller roles in the audition scene with Oscar De Velt. Both of them are convinced that they are world famous. Cast performers who can really sell these roles for all they are worth. The Opera Singer and the other bits in this scene are all great cameos.

Down and Outs
The Down and Outs are representative of out-of-work, Depression era men and women of the soup kitchens, which include the Cooks serving in the kitchens. The Down and Outs are ready for a cause, and helping Bugsy bring peace between Fat Sam and Dandy Dan is just what the doctor ordered. Additional ensemble roles in this scene include the Priest, Clipboard Willy and two Delivery Guys. If you have a smaller cast, you can use the splurged from early scenes (Fat Sam's Gang!).

Other Roles
Other standout ensemble roles include: the Radio Announcer, Paperboy (or girl), Razmataz, Maiter D's, Elegantly Dressed Lady, Waitress, Louella, The Butler, The Trumpet Player on Roller Skates, the Line of Auditionees at the Bijoux, Pop Becker, the Barber and Flash Frankie. These are all good comic roles for young performers. In a smaller ensemble you can double many of these parts. Additionally, students can be case as Speakeasy staff and customers, including a Waiter, Candy Cigarette Girls, Lena's Bodygaurds, Male Gamblers, additional Chrous Girls, Splurge Attendants, Speakeasy Customers, and Members of Fat Sam and Dandy Dan's Gangs. 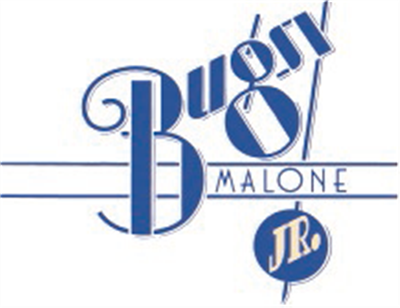