By Pasek, Benj Paul, Justin
Item No. 860912
0 reviews Write a review
Bring the magic of Broadway to your classroom and school theater with these student adaptations of classic Broadway musicals. Each of these treasured tales is teacher-tested, kid-friendly, and custom tailored for success.    The ShowKit includes the following resources you need for a successful
Read full description Print preview

The ShowKit includes the following resources you need for a successful production with easy suggestions for staging, costuming, and sets, making it a perfect opportunity for an all-school collaboration:

Overview/Synopsis:
When James is sent by his conniving aunts to chop down their old fruit tree, he discovers a magic potion which results in a tremendous peach - and launches a journey of enormous proportions. Suddenly, James finds himself in the center of the gigantic peach among human-sized insects with equally oversized personalities, but after it falls from the tree and rolls into the ocean, the group faces hunger, sharks and plenty of disagreements. Thanks to James' quick wit and creative thinking, the residents learn to live and work together as a family. The dangerous voyage is a success, but the adventure takes a whole new twist once they land on the Empire State Building.
A delightfully offbeat adaptation of the classic Roald Dahl adventure, the creative possibilities with James And The Giant Peach JR. are endless. Young actors will love playing the outlandish characters and the expanded cast allows for as many performers as you can fit on your stage.

Cast of Charachters:
LADAHLORD is a mysterious character who seems to have a hand in the magical things that are happening. Though he may seem a bit off, he carefully watches over James, making sure James moves towards to a better life. Ladahlord also serves as a guiding narrator throughout the story. This is a perfect role for a charismatic young actor who can sing and dance well.
JAMES is the hero of our story, on an epic quest to find a family of his own and gain confidence in himself. Cast a young boy with an unchanged voice and someone who has great acting instincts. Make sure he can win over an audience and is comfortable being onstage.
LADYBUG immediately takes on a doting, maternal role in James' life. This is a fantastic role for a performer with a great singing voice and a regal demeanor.
GRASSHOPPER, the leader of the Insects, is ever the optimist and assumes a paternal role in James' life. Cast a performer who can sing and act well, but foremost has a warm, inviting presence.
SPIDER is a clever creature who becomes a fun-loving older sister to James. A young woman with a spunky personality and a great voice is a perfect choice for the role.
EARTHWORM is a gentle spirit, although he can be a bit of a coward. Luckily, he gains enough courage to save the day by baiting some gullible seagulls. Earthworm looks at James as a brother figure. Cast a performer who can sing well, and more importantly, someone who isn't afraid of being a little outlandish.
CENTIPEDE may be a bit of grouch, but he is ever-loyal to the pack, and by the end of the story, he's won over by James. James sees Centipede as that cranky uncle with a heart of gold. Centipede should have a good singing voice, and be able to make strong, specific acting choices.
SPIKER AND SPONGE are the sort of aunts (or monsters) that you fear ever being stuck with. They take James into their home but only so that he can be their own personal servant. Spiker is the brains of the operation, and Sponge is more concerned with finding something to eat. These are great character roles for two young performers who are fantastic singers and actors. To play into the humor, cast a duo that contrasts completely in physical appearance.
MR TROTTER, MRES TROTTER, KARL KREATOUR, AND THE ZOO CROWD are all part of the James' nightmare. These are small, featured roles, so feel free to cast from your ensemble.
THE MATRON NURSE runs the Painswick Orphanage, and you definitely get a sense she hasn't had a vacation in years. This is a great acting role for a young woman who can command a room.
BILLY AND BOBBY BOBBY-COP are a perfectly unified pair of cops working for Scotland Yard. This is fun cameo role for two performers who work well together.
THE VAGRANTS are an ensemble of have-nots to support Spiker and Sponge's treacherous plans. These ensemble roles are important for making up the world of the musical. The Passing Man, MAN (with wallet) and Passing Woman all have featured moments where they fall victim to Spiker and Sponge.
THE REPORTERS are on the scene just as the peach is becoming larger than life. Cast a group of energetic performers.
BITSY BOTANA AND THE LADIES' GARDEN GUILD are in flowery frocks and hats, intent on having Spiker and Sponge give the keynote speech at their conference. A few young performers with good voices will do the trick.
HOLLYWOOD AGENTS jump in on the success of the growing peach with movie and Broadway deals for Spiker and Sponge. Like the Reporters, this is a fun group to cast with some lively performers.
FARM ANIMALS, WILLY WONKA, AND THE OOMPA-LOOMPAS are all in harm's way as the peach outgrows its stem and rolls towards the ocean. These are very fun cameo roles for performers with personality.
THE ANGRY CROWD is in search of the amazing giant peach, but they quickly turn into an angry mob when the peach is nowhere to be found. These ensemble parts are easy to cast from any of your company.
THE CRUISE ENSEMBLEare various vacationers en route to New York with Spiker and Sponge. Use anyone from your ensemble to fill out the scene!
SHARKS AND SEAGULLS are featured in "Plump and Juicy." Cast strong movers and dancers in these roles.
NEW YORKERS, SCREAMING WOMEN, LUCILLE VAN KOOGLESTEIN, BUNNY MACKENZIE THE THIRD, JAKE, AND JOE all witness the peach land directly on the Empire State Building and are sent into a panic! Cast a handful of characters for these cameo roles. 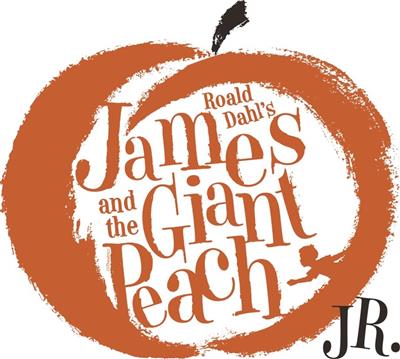