By Courts, Randy
Item No. 845499
0 reviews Write a review
Bring the magic of Broadway to your classroom and school theater with these student adaptations of classic Broadway musicals. Each of these treasured tales is teacher-tested, kid-friendly, and custom tailored for success.   The ShowKit includes all the resources you need for a successful production
Read full description Print preview

Overview/Synopsis:
What would you do if a tree house in your neighborhood could transport you anywhere you wanted to go?While exploring one afternoon, siblings Jack and Annie discover a tree house full of books.  Jack looks through a book about dinosaurs and wishes he could see a real one.  Suddenly the wind begins to blow and the tree house starts to spin wildly.  When it finally stops, Jack and Annie open their eyes to find they have been transported back to the time of the dinosaurs.  Join Jack and Annie on their adventure back in time to experience an amazing group of dinosaurs face to face.MAGIC TREE HOUSE: DINOSAURS BEFORE DARK KIDS  is an adaptation of the first of Mary Pope Osborne's award-winning fantasy adventure books from the Magic Tree House book series.  The books are number one New York Times bestsellers - more than 100 million copies have been sold in North America alone.  The series has been translated into many languages and is available in more than 100 countries around the world.

Songs:
How Far Can You See?
Taking The Tree House For A Spin
Friend or Foe (Part 1)
Friend or Foe (Part 2)
A Mother's Work Is Never Done
When We Woke
Wonder
March Of The Dinosaurs (Part 1)
March of The Dinosaurs (Part 2)
Roar
What?
The Backpack
Think, Jack, Think
When We Woke (Reprise)
Spinning Again
How Far Can You See? (Epilogue)

Cast Of Characters:
Jack
Jack is a young boy. He is bookish, careful and thoughtful, but he is NOT a nerd! Jack has tremendous curiosity about the world around him and loves to take notes about his observations. He has a good (and protective) relationship with his younger sister, Annie, though her more impetuous nature often gets on his nerves.

Annie
Annie is Jack’s younger sister and, in many ways, his opposite in terms of personality. She is a risk-taker who often follows her heart instead of her head. She loves animals of any kind and has a very loving heart.

Otto
Otto is the oldest oak tree in the forest, a mild-mannered grandfatherly or grandmotherly type and a natural storyteller.

Stump
Stump is a grumpy tree stump, who, in direct contrast to Otto, is impatient and ill-tempered. Look for an actor who has good comedic instincts and a strong speaking voice.

The Saplings
The Saplings are young, spirited and curious Trees, eager to hear about the mysterious tree house that appears in their Woods. If you have a small cast, they can double as Baby Dinosaurs.

Henry
Henry should be cast with an actor who has a strong stage presence. Although he has no "real"dialogue, his squeaks and giggles are just as important to the action as spoken words.

Gary
Gary is the boldest, hippest and friendliest of the Triceratops. He is the first to step out of the ferns to get a better look at Annie and Jack. He is as impulsive, curious and guileless as Annie.

Terri
Terri is the most domineering of the Triceratops, but her bossy comments toward Larry should serve as comic relief and not be perceived as bullying. Try casting contrasting physical types for Terri and Larry (a small Terri and a large
Larry might have a nice humorous effect).

Larry
Larry is the nerdiest of the Triceratops and is a little henpecked by Terri, but he isn’t afraid to speak his mind. He and Terri should have a good rapport.

Susan
Susan is a sassy Anatosaurus Mom who is more intrigued by Jack and Annie’s presence than afraid of them.

Joan
Joan is the most stressed out of all the Anatosaurus Mothers. She should be a little more no-nonsense compared to Susan’s sassiness.

Toto
Toto is Susan’s pestering child. She (or he) is as sassy as her mother and a bit of an imp. This is not a large acting or singing role, but look for a smaller child who has a good stage presence.

Baby Dinosaurs
The baby dinosaurs are freshly hatched Anatosaurus dinosaurs who are filled with wonder upon encountering the world for the first time.

Ankylosaurus
Ankylosaurus are four-ton dinosaurs with spikes on their backs. Look for actors with strong speaking voices who aren’t afraid to directly address the audience and who can pronounce more difficult words.

Prooceratops
Prooceratops are the "runts"of the dinosaur litter, so look for smaller actors with good speaking voices who aren’t afraid to directly address the audience.

Iguanodons
Iguanodons are the cool kids of the dinosaur lot. They have spikes for thumbs and are not afraid to brag about it. Look for actors with good speaking voices who aren’t afraid to directly address the audience.

Panoplosaurus
Panoplosaurus are tank-like dinosaurs who take a lot of pride in all of their unique characteristics. Look for actors with strong speaking voices who aren’t afraid to directly address the audience and who have the ability to pronounce more difficult words.

Troodon
Troodon dinosaurs are the "brains"of the dinosaur lot but are not braggarts. Look for actors with strong speaking voices who aren’t afraid to directly address the audience.

T-Rex
T-Rex is a fierce, meat-eating dinosaur. Look for an actor who has a strong stage presence and is comfortable moving onstage and adept at learning more complicated blocking. 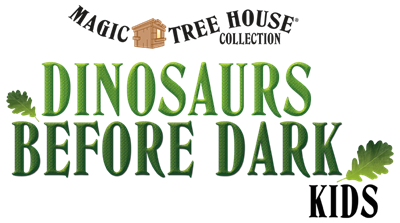