Shop our fall clearance event...hurry while supplies last!
Back to overview

By Stiles, George
Item No. 866250
0 reviews Write a review
Bring the magic of Broadway to your classroom and school theater with these student adaptations of classic Broadway musicals. Each of these treasured tales is teacher-tested, kid-friendly, and custom tailored for success.    The ShowKit includes all the resources you need for a successful production
Read full description Print preview

Overview/Synopsis:
Ugly looks quite a bit different from his darling duckling brothers and sisters. The other animals on the farm are quick to notice and point this out, despite his mother's protective flapping. Feeling rather foul about himself, the little fowl finds himself on an adventure of self-discovery, all the while unknowingly outwitting a very hungry Cat. Along the way, Ugly meets a whole flock of unique characters and finds out being different is not a bad thing to be.
Featuring a flexible cast size, Honk! JR. can be performed with simple sets and costumes. No feathers or fur necessary! 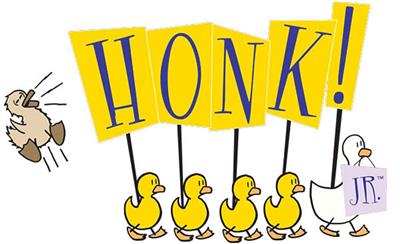